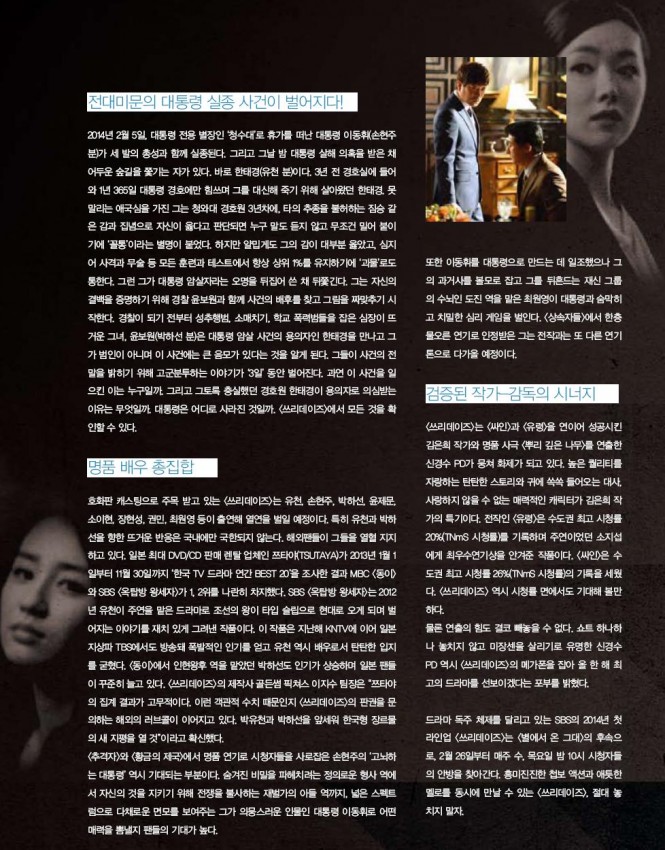 “Three Days”, the case of the President’s disappearance, a record of those 3 days

There are moments that can change the world.
In that moment, it takes just one second to get back to the original point and avoid death.
Especially for the leader of a country, one second is as such. Their life and death have great significance. Who would risk the danger to cause their death and for what reason?

The new SBS Wed-Thurs drama “Three Days” starts with this question. The president has gone to the presidential villa on a 4-day-and-3-night trip and, during the night, he disappeared after the sound of 3 gunshots. A search was launched to find the missing president within 3 days.

3 days, 72 hours, 4320 seconds.
In that time, someone wants the president dead. To protect him, the security officers must first get rid of his political enemies. The missing president Lee Dong Hwi, his bodyguard Han Tae Kyung, the policewoman who helps him Yoon Bo Won, and others. Unravelling the case of the missing president, they are coming towards us with breath-stopping conspiracy, infighting and ardent romance that happen in 3 days.

Previously unheard of, the president has disappeared!
5th Feb 2014, President Lee Dong Hwi (actor Son Hyun Joo), away at the presidential villa, disappeared without a trace after the sound of 3 gunshots. And that night, one person is suspected of killing the president and thus is being chased and driven to dark forest paths. That person is Han Tae Kyung (actor Park Yuchun). Han Tae Kyung who became a presidential bodyguard 3 years ago, lives for the sole purpose of protecting the president to the best of his ability 365 days a year and will give up his life for the president. He is deeply patriotic. In his 3 years as a bodyguard in the Blue House, he has unmatchable creature instincts; when he thinks he is right, he will not listen to anyone and will persevere to the end, and thus is well-known for being as stubborn as an ox. But his instincts are mostly correct, and for all the trainings and tests like shooting and martial arts, he is always in the top 1%; he can be said to be an “abnormality”. However, a person such as he is now saddled with the taint of presidential assassination and is being chased down.

To prove his own innocence, he starts to investigate with policewoman Yoon Bo Won, to piece together the truth. Before becoming a police officer, Yoon Bo Won (actress Park Ha Sun) has always been zealous about catching molesters, thieves, violent offenders in school and such. After meeting Han Tae Kyung who is suspected of assassinating the president, she knows he is not a criminal and becomes aware of a huge conspiracy behind the scenes. The story of their lone battle to uncover the whole incident unfolds in ’3 days’. Who could be the person instigating it all, what could be the reason for such a loyal bodyguard as Han Tae Kyung to become a suspect, where did the president disappear to, all these will be answered in “Three Days”.